As I sit in front of my laptop staring at the gloomy grey skies of New York City, my mind wanders off to the most recent vacation I took in the warm and whimsical jazz capital, New Orleans, Louisiana.

Prior to our trip, everyone I had mentioned our upcoming New Orleans trip to either told me they loved it and suggested spots to visit, or they told me it was on their “to-do” list. My friend Heather is from New Orleans so she gave me the best list possible – thanks, Heather! [The funny thing is, now living in Australia, she took a trip to New Zealand around the same time, so it was like a hometown swap]. Since our trip, I know of three different friends who have also visited the cheerful city. 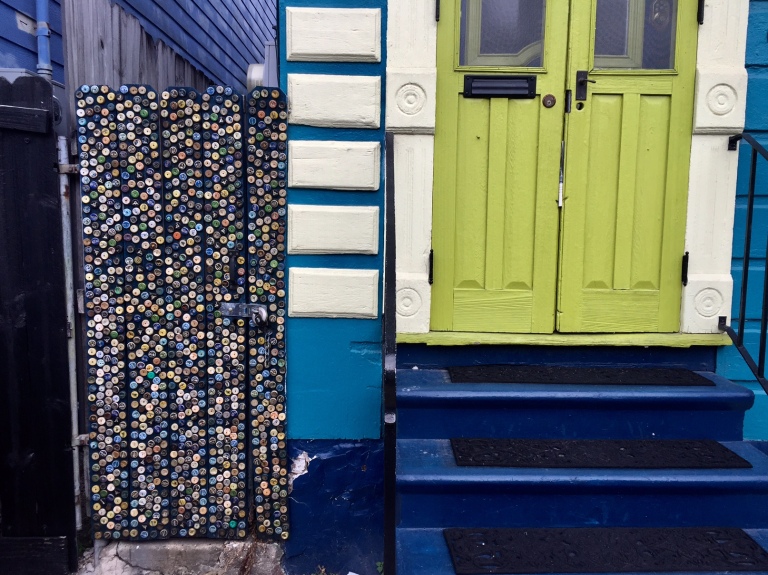 What I can say about NOLA is that you must repeat your movements: once, during the day, and again at night. During the day, with the sun kissing your skin and the wind whipping your hair, it almost feels like you don’t have a worry in the world as you walk down the streets filled with colorful units reminiscent of a movie set. On the contrary, as the after-midnight moon hovers over the city after the lively rush has disappeared, the quaint, romantic streets become a little spooky, with a quixotic, eerie small town vibe. In saying so, slow-dancing on the corner to some blues tunes during witching hour is very enchanting. After all, NOLA does have a thing with Voodoo.

One thing that my boyfriend and I really bond over is our love for food. Evidently, on our checklist for New Orleans was to eat all the seafood, Cajun, Creole, and BBQ we could. We both agree that we much prefer to eat where the locals do for much more authentic fare, so even though we “had to” see Bourbon Street and surrounding touristy areas, we tried to avoid it as much as possible. As soon as we arrived, we headed to the Crescent City markets to grab a homemade juice and hot tamales. Exploring by foot, certain areas of the city – especially in the CBD – reminded me of a mix between the streets of Downtown Boston and Chicago. Coined the most “unique city” in the U.S., New Orleans certainly has something for everyone – whether you love music, food, drinking, art, shopping… the city literally has it all. 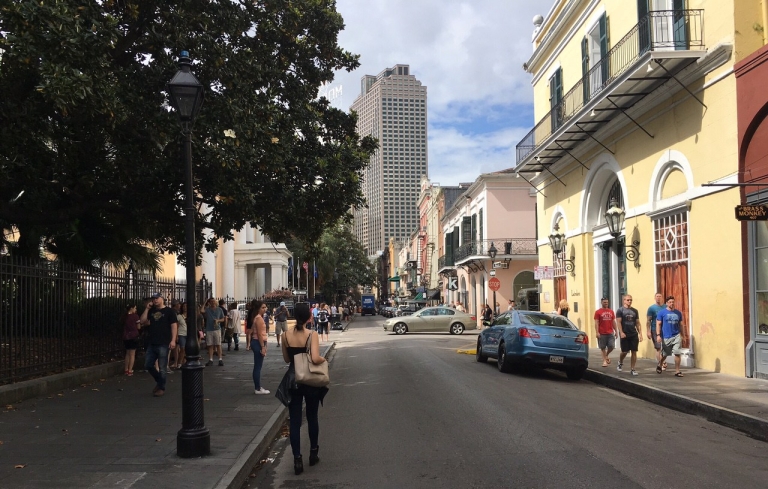 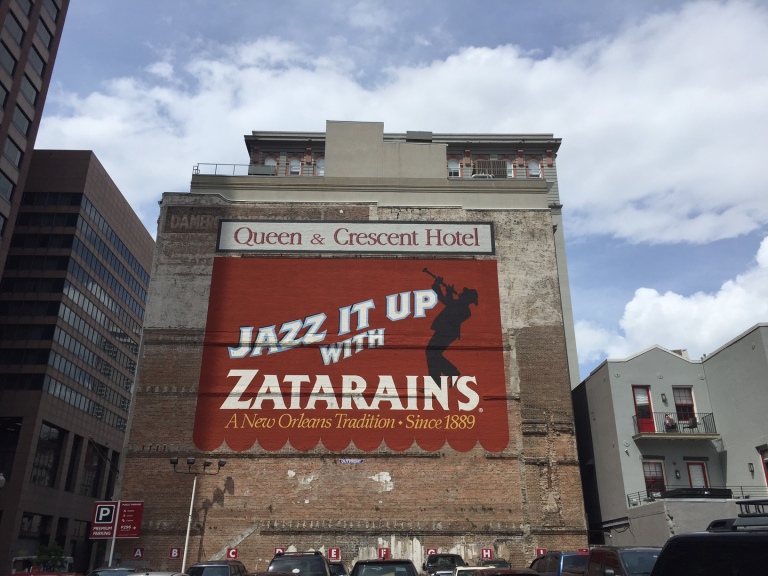 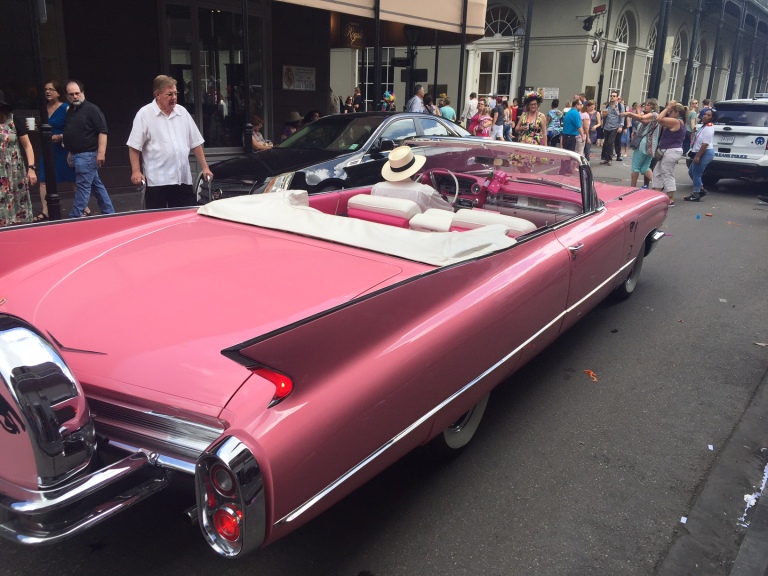 Music – Sweet tunes literally flow down every street, on each corner, from Bourbon to Oak. You can see the passion the musicians have for their chosen art as well, which is what makes it so beautifully authentic.

Food – Obviously, in the South, you’re going to get your bang for your buck. I don’t think there was one night we were there that I didn’t eat my weight in seafood. Below, I’ve listed a few of my recommendations on places to eat, but one thing I must say is that you really have not tested the boundaries of your relationship until you’ve eaten 4 pounds of crawfish and 4 pounds of shrimp together, at a no-frills restaurant, with your bare hands.

Drinking – I believe that, just like in Italy, the fact people can walk around with alcoholic beverages in their hand means people are less likely to get out of control. There’s less “rush” to finish your drink before heading to the next spot, because you can take it with you. If you’re waiting in line for a restaurant, it also makes hangry people less anxious because time goes by faster with a long margarita daiquiri in hand. 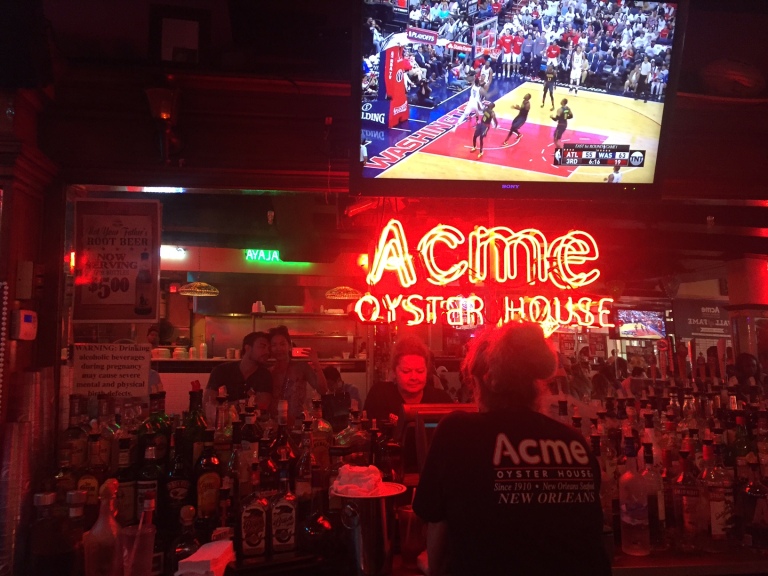 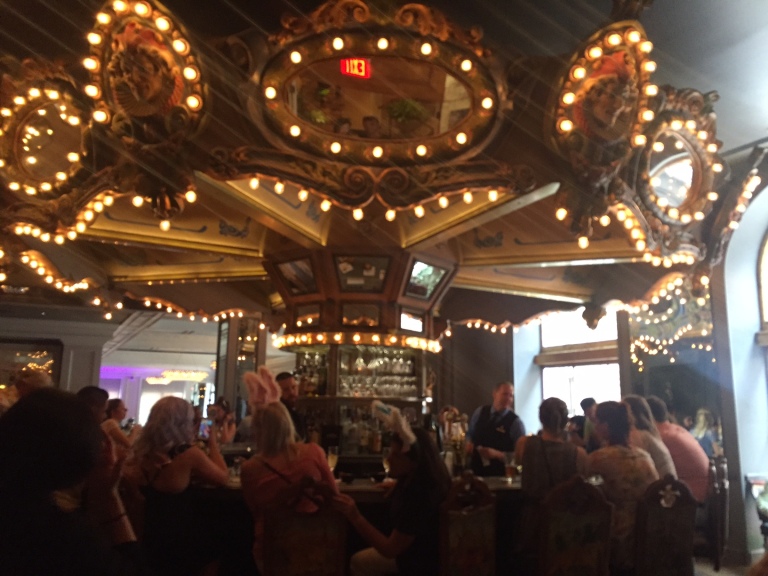 Art – There is a specific “Art District” to visit for the art connoisseurs of the world. However, there are a lot of art galleries in the French Quarter as well. Also, up on Frenchmen Street, there is an Art Fair. We didn’t get to see it as it was closed during Easter, but we heard it was a good spot to check out. 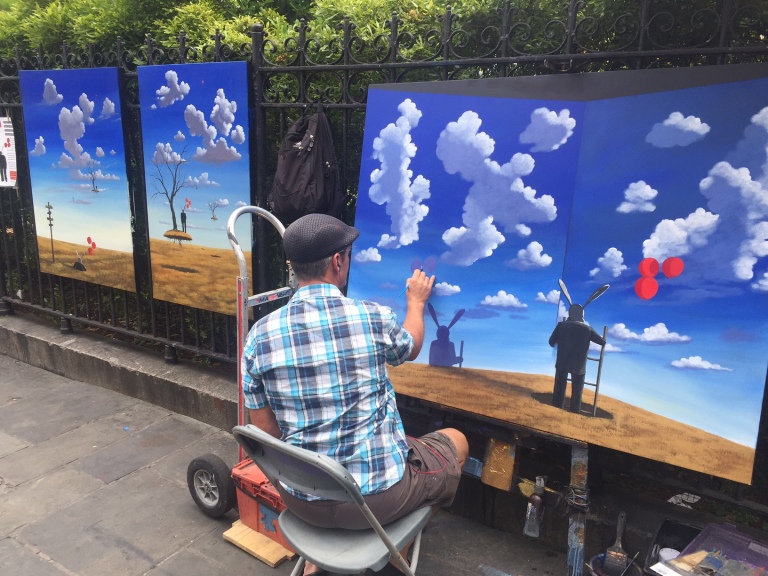 Shopping – Again, take your time during the day to browse the shops throughout the French Quarter. With a drink in hand, and lively jazz tunes flowing in through the stores, the window shopping (or real shopping) makes for a leisurely time for all. 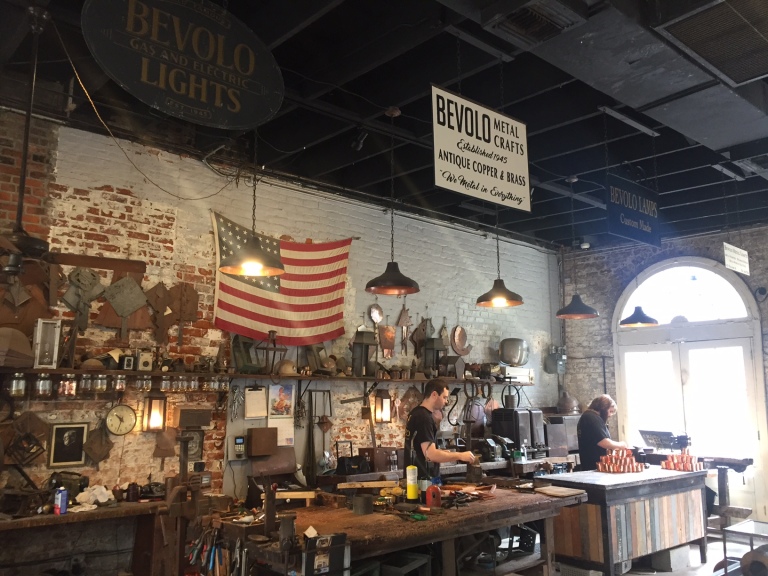 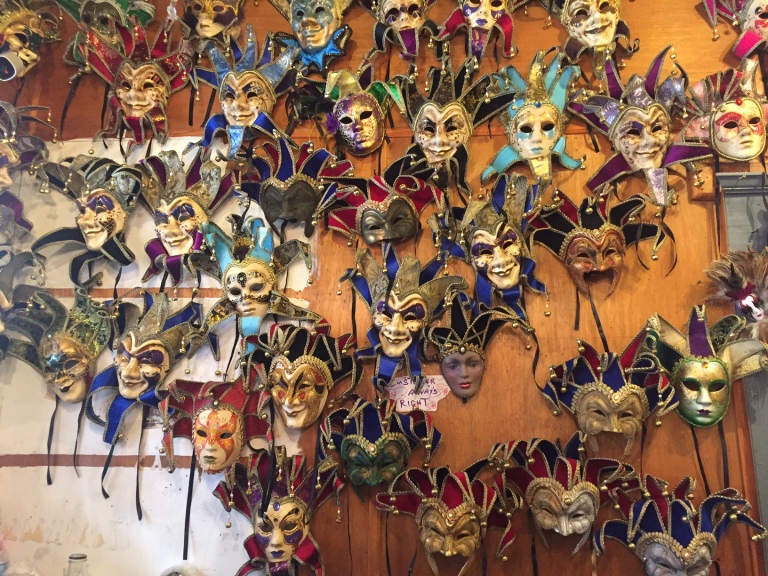 Below, I’ve listed some places I was recommended to visit, which I would also suggest to others that are planning on visiting New Orleans:

Mother’s – this local joint was so good, we went back twice for the PO Boys. This decision was probably fueled by the fact that our hotel was a two minute walk away.

Café du Monde – it’s a tourist trap but we “had to do it”. Instead of waiting over an hour to sit in the café, I suggest to get a Café au Lait (iced, if it’s nice and hot out) and beignets to go, and walk over to Jackson Square where you can enjoy your sweet treats on a bench whilst listening to some music.

Felix’s – My mouth is literally watering just thinking about those fat oysters (raw) and chargrilled oysters. Originally, we had wanted to eat at Acme, but the line was double the size so we opted for Felix’s. It ended up being the better choice. We went to Acme the next day, but after comparing, we agreed that we preferred the food and service at Felix’s, and so we went back again the following night.

Cajun Seafood – the place to go for “no-frills” crawfish. For two people, I would suggest 4-5 pounds of crawfish, and if you’re going to add some shrimp (so tasty), go for 2-3 pounds. If you want to go here, go during the day and then catch some tunes on Frenchmen Street, which is a 20 minute walk (5 minute Uber) away. Avoid the place during the evening, as it can be a little sketchy. We weren’t informed of this, and after our meal when nightfall came, the place was surrounded by ten cop cars, which was a little dodgy. I Googled it later and found out there had been some previous shootings in the area. Literal food to die for.

Check out the Monument to the Immigrants – it’s not clear in the photo below, but somebody has thrown Mardi Gras beads onto the statue of the lady, so it looks like she’s offering the beads to the heavens.

2900 Prytania St – where Fitzgerald boarded whilst editing proofs of This Side of Paradise, in January of 1920. 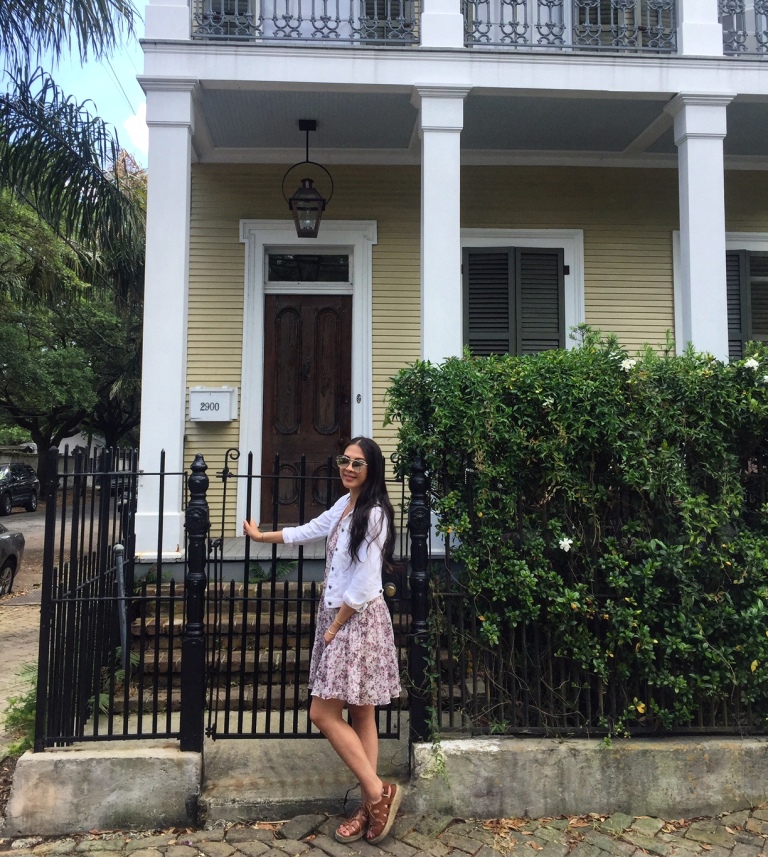 Lafayette Cemetery – I’m not a huge fan of visiting cemeteries, but we went anyway and it was interesting to see above-ground tombstones. Right across the street is The Commander’s Palace where, during the weekdays, they offer martinis for $0.25!!

Napoleon House – enjoy a Pimm’s cup before dinner, and take in the beautiful interior. There is also a beautiful courtyard in the back.

Café Amelie – they also have a cute courtyard, which is perfect for a relaxing bite. 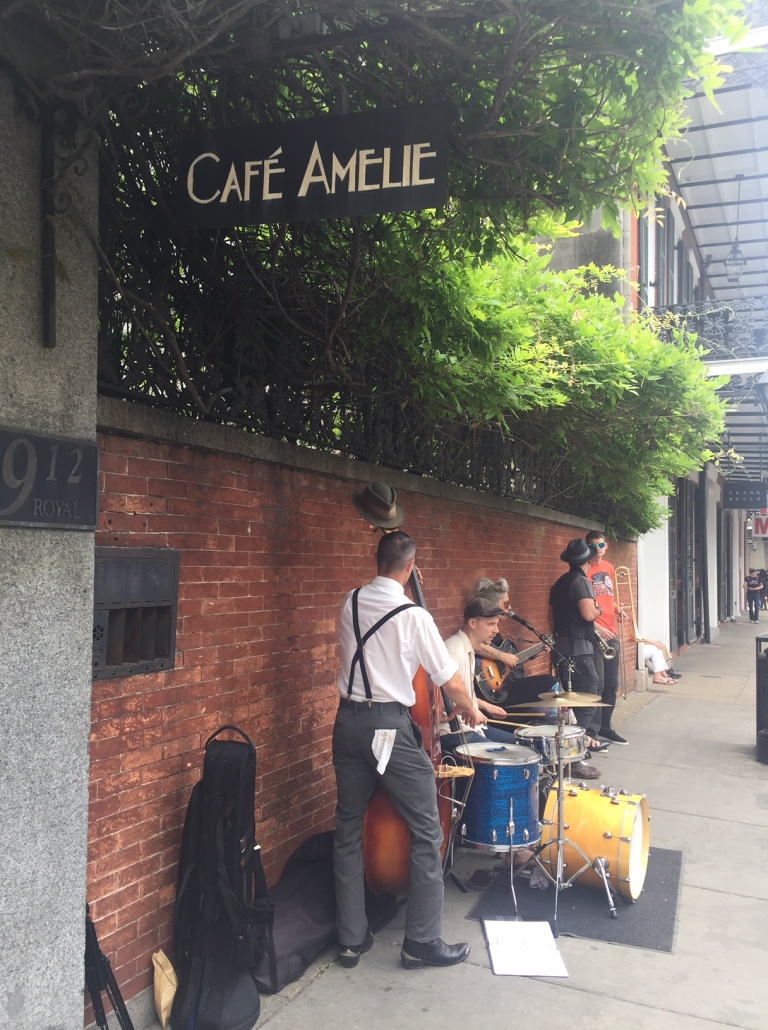 Do a swamp tour – we did the Cajun Swamp Tour, which was easy to book. They also pick you up from your hotel and drop you back. ALLIGATORS! 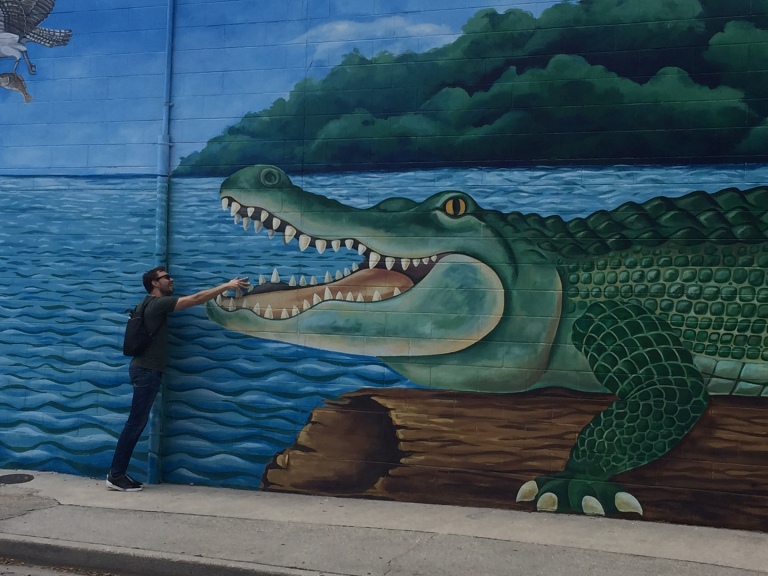 The great thing is that everything is very close. Unless you want to venture out of the city center, you don’t need to rent a car. I had starred around 70 spots to see in my Google Maps, and after an hour of walking around, we had already checked off about 10. For instance, you can visit the visit the Crescent City markets on Julia St, spend a few hours in the WWII Museum, and get lunch at Cochon Butcher (try the Muffaletta!); walk the Lafayette Cemetery, pass by 2900 Prytania, then have lunch or a drink at The Commander’s Palace – just don’t forget to dress up for the occasion! The fine dining areas in NOLA require men to wear coats – it wasn’t until only recently, places like Galatoire’s, Commander’s Palace, and possibly even Brennan’s, required men to don ties.

Overall, the food, the music, the art, the people and all round Southern hospitality and charm, and the weather(!!!) made for a wonderful trip in this mystical one-of-a-kind city. Spending our Easter break there really was a treat, and now I know what it means to miss New Orleans. 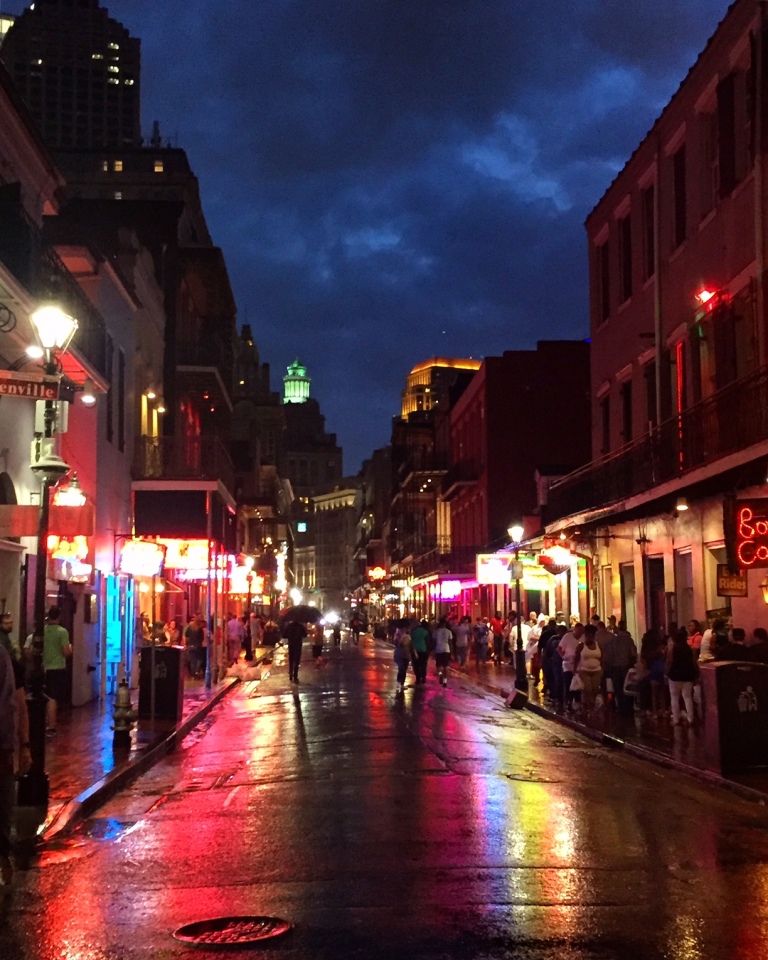