A trip I’d had on my travel bucket list for a while was to Arizona, to see the Grand Canyon. Since I like to plan my trips ahead of time but my Libra boyfriend, Alessandro, is more last-minute, I had pencilled in my calendar that we were going over Labor Day weekend, but we did not actually book our trip until two weeks before we went. Fortunately, we were both able to take off the Friday off work. Depending on what sights you choose to see, the trip itself can be packed into a full weekend. We took 3 full days there, leaving an additional day for flying home, since we chose to see the Grand Canyon, Antelope Canyon, Horseshoe Bend, Monument Valley, and Sedona. If we had had more time, we would have loved to see Bryce Canyon, Zion, The Wave, etc., but next time!

Upon landing in Phoenix, we picked up our rental car and drove straight to Grand Canyon, which took about 3 and a half hours. We arrived right in time to explore all the different viewpoints, before spending the evening watching a beautiful sunset at Mohave Point. It was all so phenomenal, it almost looked like a painting. We were coincidentally at the Grand Canyon during the Centennial, celebrating 100 years of the Natural Wonder of the World being established as a national park, so I suppose there was even more hype than usual. 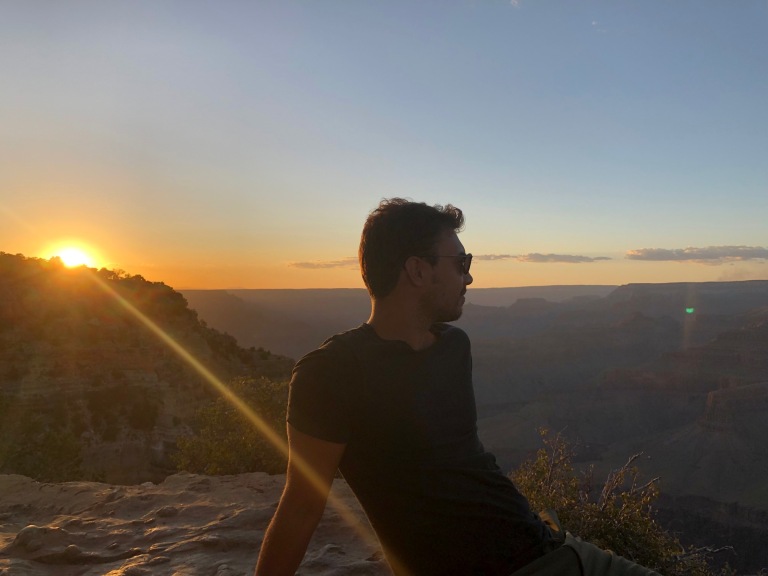 I must say, when we travel, we like to eat good food, but there weren’t a lot of options in the Grand Canyon area. Weird, if you think about it – it’s such a tourist-driven spot, you’d think they would have some nicer, upscale restaurants. It was all junk chains or mediocre-at-best restaurants. We settled for a Mexican spot that reminded me of a bad diner in NJ that I had stopped off in while on the way home from a long work trip. I mean, after all – how can you screw up nachos and a margarita? Answer: very easily. However, the people were nice, so it made up for it. Side note: everyone in Arizona is very friendly.

The next morning, we drove to Desert View to take in more breathtaking views of the Grand Canyon.

Following this, we drove about 2 hours to Page, where we visited the Horseshoe Bend. Ale was surprisingly afraid of the heights at this point (he had looked up the death rate stats at Grand Canyon and Horseshoe Bend), but he managed to get some decent shots of me overlooking the Colorado River. Some people were really bravely stupid and got some really crazy shots on some very questionable ledges #forthegram. 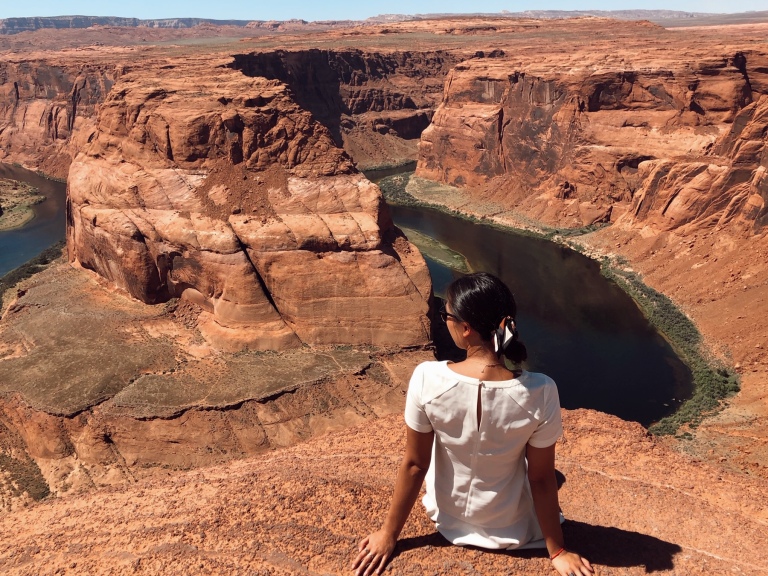 We had some time to kill before our tour to see the Lower Antelope Canyon, so we decided to check out the beach at Glen Canyon. We had a quick dip in Lake Powell, which runs across the state line. This was a really cool experience, because swimming on the border of two states is not something you get to do everyday. The water looked nicer from far away than it was when you got in, but it cooled us off, which was a savior in the heat.

Not realizing that there was a 1-hour time difference between Arizona and Utah (the time on our phones, car, and watch switched to an hour ahead when we crossed the state line between Arizona and Utah), we thought we had to rush to the Antelope Canyon – an hour prior to our tour time!! It ended up being fine because we had a chance to relax a little, in the cool AC. We zig-zagged across the state line so many times, we started making jokes about how many times we had been to Utah and Arizona on this short trip. Crossing state lines always reminds me of the movie A Walk To Remember. Anyway, I digress.

Note to those wanting to visit the Lower Antelope Canyon: you must go with a guided tour and I would highly recommend booking in advance. The two tour companies are Dixie Ellis and Ken’s Tours. We went with Dixie Ellis. Book in advance so you get to visit during prime time (10am – 2pm). As I mentioned, we booked our trip within two weeks of leaving, so we had to settle for the last time slot of 4:45pm which wasn’t terrible but wasn’t prime time for the best lighting inside “The Corkscrew”, 120 feet deep. Leaving it so late, we were lucky that we even got to see it, but it was still beautiful, regardless of the lighting. We learned a lot about the Navajo tribe and their history from our Navajo guide, Ian Blackhorse Johnson, a part Native American/part Irish young man. 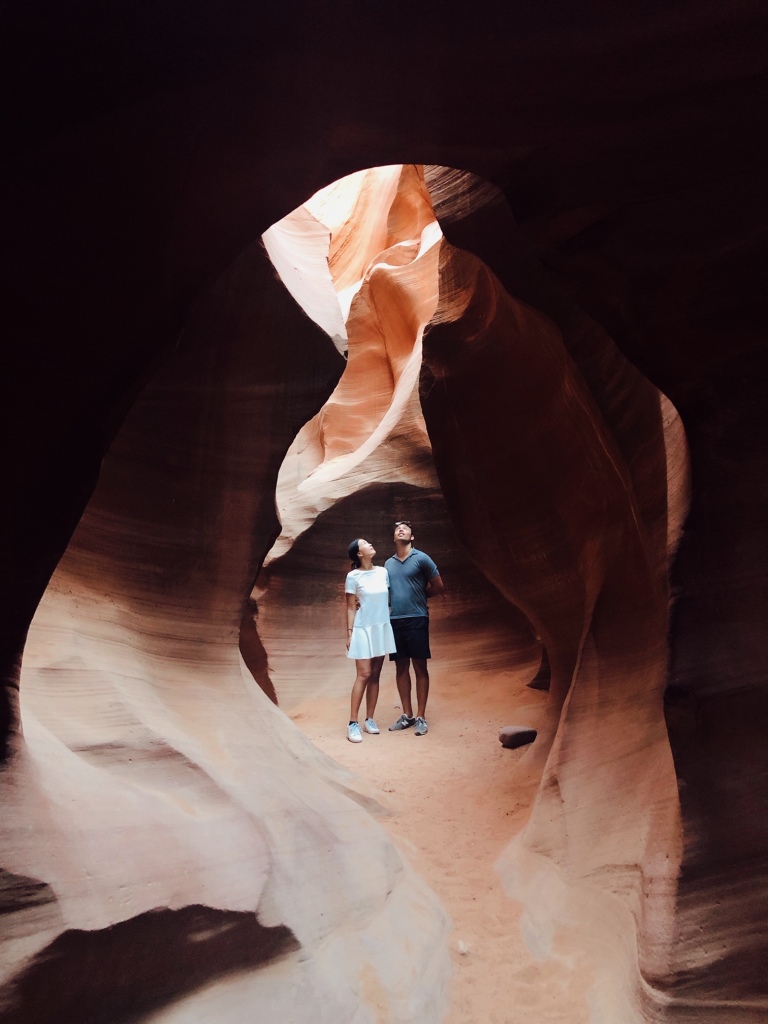 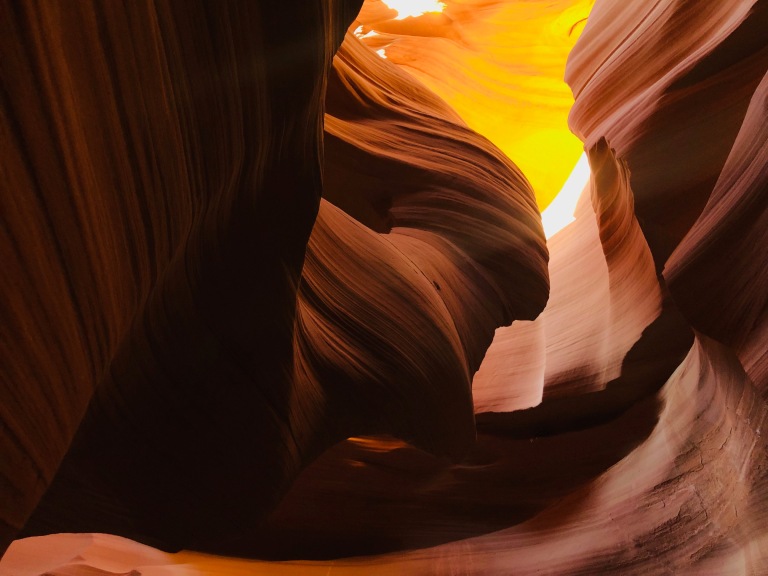 Following the tour, we decided to have an early dinner in Page, since there would be less options in Monument Valley, where we were headed off to next. We decided to get some Texas BBQ at Big John’s Texas BBQ, and my oh my, I kid you not – I ate the best pulled pork sandwich I’ve had in my life. Better than any pulled pork I’ve had in Texas, and I’ve been to Texas quite a lot. The photo below doesn’t look great, but trust me – you have got to try this, if you’re in the area.

The sunset drive to Monument Valley was gorgeous but it quickly got dark and it was a little scary driving in the dark, for fear of elk running out onto the road. The drive was two and a half hours, and we couldn’t see a thing. Arriving close to 10pm, we checked into our hotel and realized that outside our hotel room, we had the perfect view of a magical night sky: the stars were large and twinkly and we were directly underneath the Milky Way – something I had never seen before. We sat outside for a couple of minutes and in that brief moment, we spotted a shooting star! It was so romantic to be the only two people sitting outside, in the middle of nowhere (literally – I had no cell service for the first two days), looking up at the stars (something we never see in NYC), and seeing the same shooting star at the same time. We were both so exhausted from the long day, but wanted to stay outside to take in the beauty of the sky, we decided to head back outside after showering the dirt off ourselves. Sitting outside for another 20 minutes under the big blanket of stars, we both saw one more shooting star each, before calling it a night. 3 shooting stars in a night; so extraordinary. In this day and age, it’s a reflex to grab our phones to try to capture a moment and of course, I tried to take a snap but my iPhone obviously couldn’t capture the stars in the sky. The moment is only ingrained in my mind, but it is a certainly a night I will never forget. ❤

The next morning, we woke up and realized we were surrounded by the most beautiful view. In the darkness of the previous night, we didn’t realize that we had driven past all the buttes (pronounced bee-utes, not butts lol) within the Monument Valley. We had a quick breakfast (mediocre at best, unfortunately), and made our way onwards to Monument Valley Navajo Tribal Park, but first – we stopped off at Forrest Gump Point (obviously), and asked some strangers to risk their lives by taking our photos. 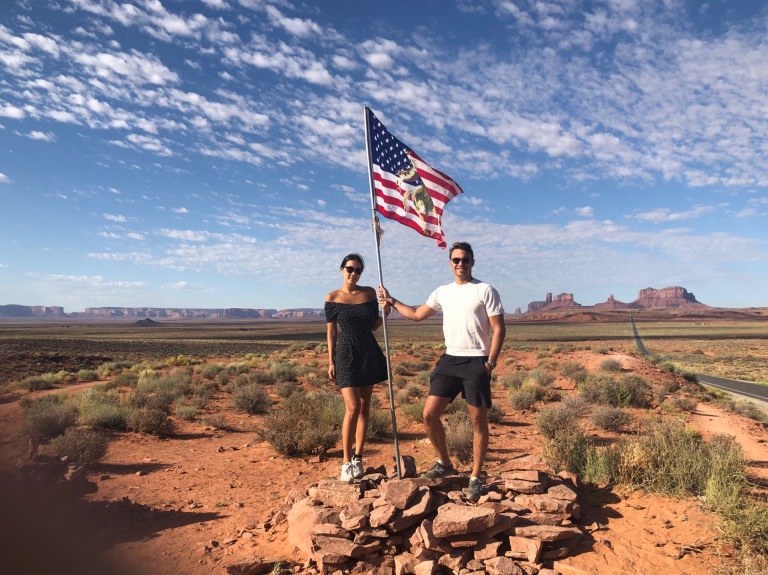 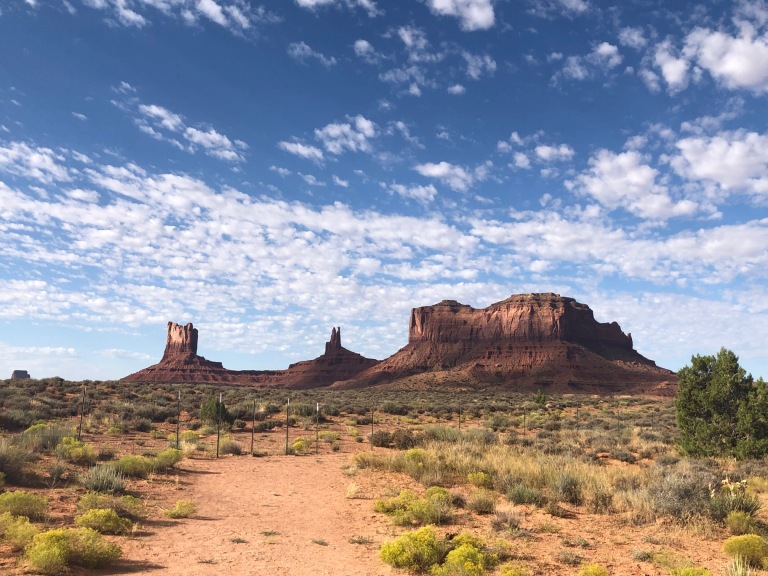 Making our way through Monument Valley Navajo Tribal Park was incredible, and also where our SUV rental came in handy. We thought the guy at Enterprise had jipped us, but it really helped on this drive – just a little tip, for those visiting Monument Valley. By the end of the drive, the whole car was covered in red dust. While we’re on the topic of cars, I’d like to give a huge shoutout to my boyfriend for driving the whole time, because I hate driving. My job, instead, was to pick the TED podcasts we listened to, and now we’re more educated than we were prior to this trip. Win-win for all. 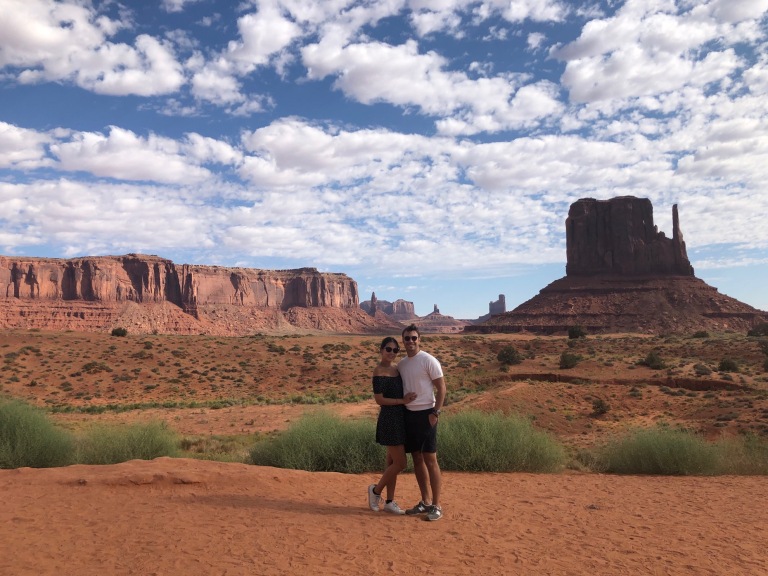 Making our way back down south towards Phoenix, we drove through Sedona and had lunch (again, mediocre at best). We wanted to check out some of the famous Sedona vortexes, but 1) we wanted to avoid traffic heading back to Phoenix, 2) it was literally so hot out, I didn’t think we would survive hiking a two-hour trail, and 3) we were kind of skeptical anyway. If anyone has visited one of the vortexes, please let me know your thoughts! I’d love to hear your feedback.

Sedona, from what we saw in our short time there, looked beautiful, but the main part of town was too commercialized for our liking. If anything, it took away from the magic of the place. Vendors selling overpriced crystals, milking what Sedona is known for – being one of the most spiritual destinations in the world – and juices for $13! Never have I ever, not even in Manhattan.

We decided to hit the road before traffic got worse, and changed our route to Scottsdale for dinner. With more food options, we decided to go for Mexican at Cien Agaves, which was pretty good. We have our favorite spot for fajitas in Manhattan (Agave in the West Village, what up!), but this was a good alternative in a different city. We had a really early wake-up for our flight the next morning, so we headed back to the hotel and called it a night.

Overall, this mini road-trip was such an incredible experience – one I highly recommend to everyone visiting the U.S., or even those who live here but have never been. We had such a great time, it will definitely be one for the books.